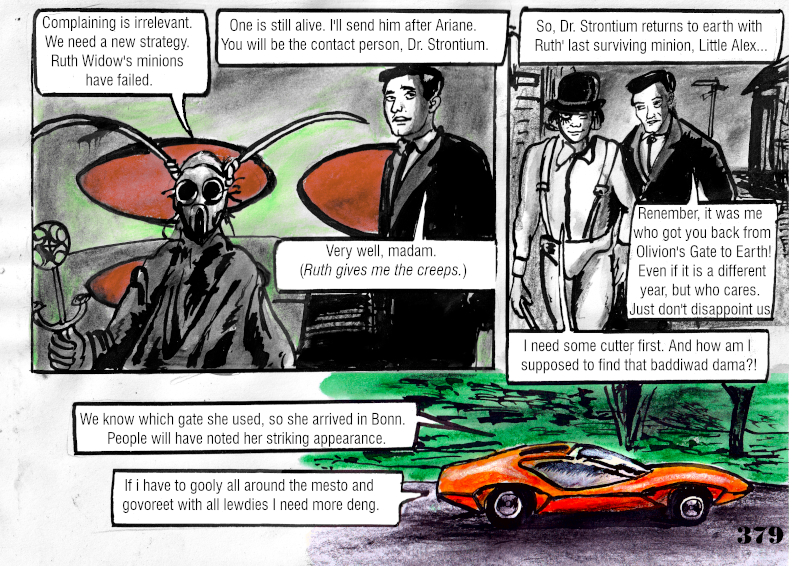 If you forgot, darlings, Little Alex is the last surviving exo-character of the four minions. The separated here: LINK

Sweet helmet on the villain. Also. Nice set of wheels. . That clearly.isn't the magician's Corvette. The magician response. Why does everyone keep saying that?

Dr. Strontium's car is a Centaur Concept; it is based on the earlier Adam Probe, which should be well known to Little Alex, as he drove it in Clockwork Orange.

That's cool !!!! Is that Brittain's and Germany's version of the American Corvette .
I only ask...... Because the body types are very similar . Sorry for the confusion.from my end.

Well, there isn't a connection to the Corvette or the concept of the american musclecar.
The nickname "german corvette" was often applied to the Opel GT (Peter drives one in parts of the comic.) This makes a bit more sense, as Opel belongs to GM as Chevrolet, and the design looks really similar - except that the GT is much smaller, has a much smaller engine and has a steel body opposed to the plastic Corvette.
The Centaur Concept has a plastic body, but is a typical british sportscar. Most countries, even those who built famous sportcars, never had any specific national style for sportcars. The british had even three distinctive styles that were all kind of unique. Strangely, the UK seemed to have more sport car manufactors from the 1950ies to 1980ies then all other countries ever. Most of them are gone. One of those three british styles was the (often futuristic) kitcar, very often wedge shaped. This is the category of the Centaur and similar cars - a light, simple but futuristic plastic body mounted on the chassis of a small popular serial car (Hillman Imp, rear engined like the VW beetle, that was mostly used for conversions,) with a serial small or mid-sized engine. These kind of cars could be built in small numbers, sometimes even hand crafted.

Nice .thanks for explaining. I like the metal car the best too. .. I was doing a line from the new magnum pi series. When everyone that sees Jay Hernandez driving it. They people are always like "That clearly isn't your Corvette". And his character responds " why does everyone keep saying that"?. It's a really good remake. Despite the fact that they could of done better at casting. For Thomas Magnums roll because he doesn't look anything like the original guy and they made Higgins a girl.

Ah, i see, I never watched that serial. Saw very few of the orginal, but none of the remake.

Yeah I wasn't. Even born when the original was oUt

Dr. Strontium as the errand boy

It might take some time until we see Ruth Widow, but if she says you are the errand boy, you say "Yes, mam" and start running.

So with your love of classic vehicles will we get to see a D-Type Jag any time soon ? (Always wanted one of those, or a Kettenkrad, or a TR7, or a...)

A Kettenkrad appears several times in the earlier episodes back in Oblivion's gate. (Vehicle of choice of the one-percenter Big Jock) Ariane's favourite car type is the Jaguar mk2. There should be an E-Type somewhere at least, the D-type as racing car is rather rare on the streets.

There used to be someone who drove a D-type around locally (southern England) . Two seater road version but still with the asymmetric single fin, painted British Racing Green of course. I think it was probably a kit car body on who knows what chassis, but it looked as cool as fuck! Also have fond memories of watching an Amphicar drive into the sea when I was a kid in the late 60s early 70s.

I faintly recall someone rebuilt an Type D, but i is at least 20 years ago I guess, probably more.